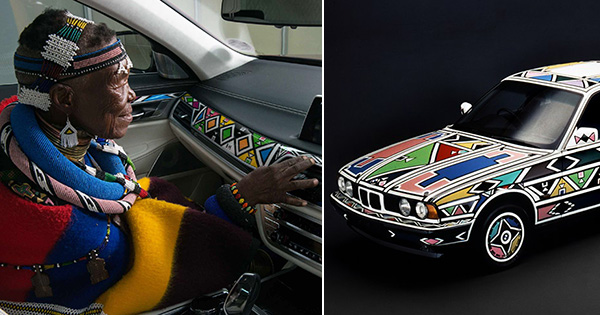 In 1991, Esther Mahlangu, an 82-year old South African Ndebele artist and entrepreneur, became the first non-Western and first Black woman to design artwork on a BMW car. 26 years later, the German car giant is her partnering with her again for a new project.

Esther’s unique and colorful artworks surely caught BMW’s attention. In 1991, she’s teamed up with BMW to create an art car as other artists like Andy Warhol, David Hockney, and Frank Stella had done before. But hers is different. She created the first “African Art Car” from a BMW 525i painted with classic motifs of the Ndebele tribe.

In 2016, BMW once again selected her to create new car designs for a BMW Individual 7 Series. The car was on display at the Frieze Art Fair which took place in London. Mahlangu’s 1991 BMW Artcar was also exhibited at the British Museum as a part of “South Africa: the art of a nation.”

Her artworks strongly depict the traditions of Ndebele tribe where she came from. Women from the Ndebele tribe usually decorate the walls with striking patterns and designs as a means of communication within the community.

“The patterns I have used on the BMW parts marry tradition and to the essence of BMW. When BMW sent me the panels to paint I could see the design in my head and I just wanted to get started … My heart was full of joy when BMW asked me to paint for them again,” Esther said about her second collaboration with BMW.

Aside from BMW, she also got to work with other prestigious brands such as British Airways where her artworks have been featured on their plane tails. She also collaborated with John Legend for Beldevere, a beverage company, on their RED campaign which aims to fight against AIDS. Swedish sneaker brand Eytys also teamed up with her to create a special pair of sneakers embroidered with her artwork.

Even more, in April 2018, Mahlungu received an honorary doctorate by the University of Johannesburg for her contribution to the world of arts.

Despite being considered an icon in South Africa and an internationally-proclaimed artist, Mahlangu says she stays grounded.

“My art has taken me all over the world and I have seen many places,” she said in a statement. “I have painted many walls and objects and my work is in many museums, but I am still Esther Mahlangu from Mpumalanga in South Africa…”

For more details about Esther Mahlangu and her artwork, visit www.esthermahlanguart.com